Riding in a group is an exciting experience and can lead to some amazing adventures! St George BUG has come up with some helpful hints to ensure everyone remains safe and has a fun time.

Cyclists often ride two abreast for a reason.  It’s safer. It increases visibility and reduces the chances of being in an accident with a motor vehicle.

Bicycle riders are one of the most vulnerable road users, and riding two abreast make them more visible.  Two riders cycling side by side can be seen from much further away, than a single rider. Being able to see riders from a further distance will enable drivers to prepare to overtake the riders safely, in accordance with the Minimum Passing Distance law.

Riding two abreast also allows the motorist to overtake the group of riders more quickly as the line is only about half as long. This allows the vehicle to pass the group less time (giving for moving in and out to the correct location on the road).  A good overtake is safer for everyone, the other vehicles on the road, the driver and their passengers and all the riders on the road in the group.

Broken Centre Line Overtaking is legal, when safe to do so. 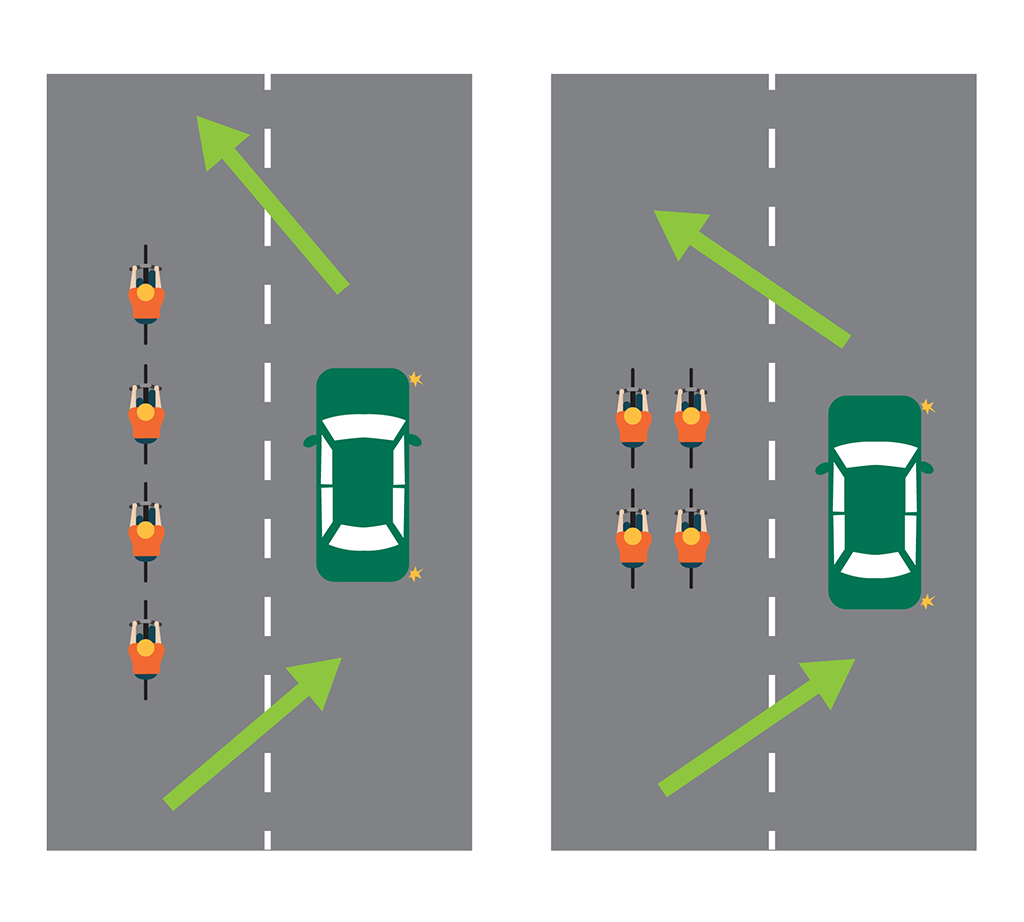 Unbroken Centre Line Overtaking is legal, when safe to do so. 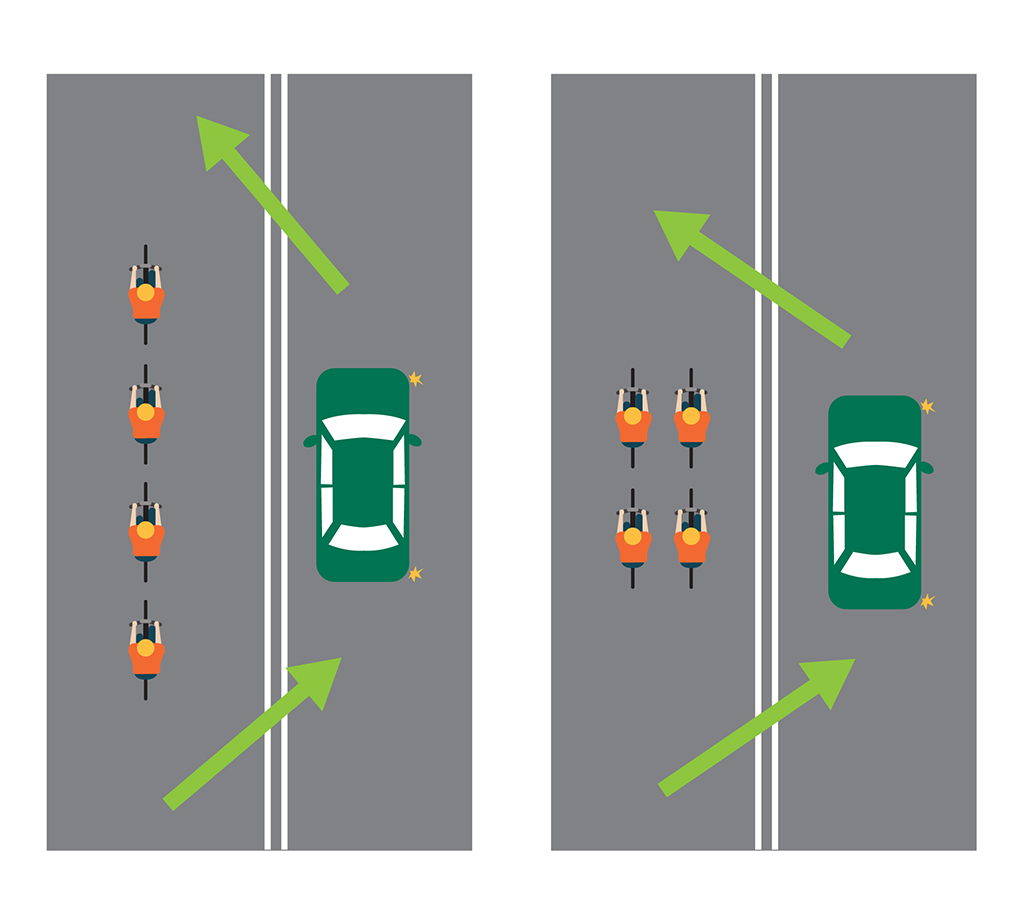 What do cyclists need to know about riding two abreast?

Cyclists must be within 1.5 metres of each other when riding two abreast.  A third rider can overtake these two riders, but cannot continue to ride beside them.

Riders should be courteous and consider other roads users around them, and if safe may change to single file in some circumstances.

What do drivers need to know when overtaking cyclists riding two abreast?

Only overtake when it is safe and legal to do so. We want all road users to get to their destinations safely.

Drivers are able to cross double lines and go on painted islands to provide bike riders with this distance, if it is safe to do so.

FIND OUT MORE ABOUT THE MINIMUM PASSING DISTANCE LAW HERE

A few seconds can save a life so please be patient. Our roads are shared spaces. Mutual respect and cooperation are the key to ensure everyone remains safe.

In May 2018, after a 2 year trial, the Minimum Passing Distance became permanent law in NSW.  Providing space when overtaking cyclists, is helping to protect our most vulnerable road users. 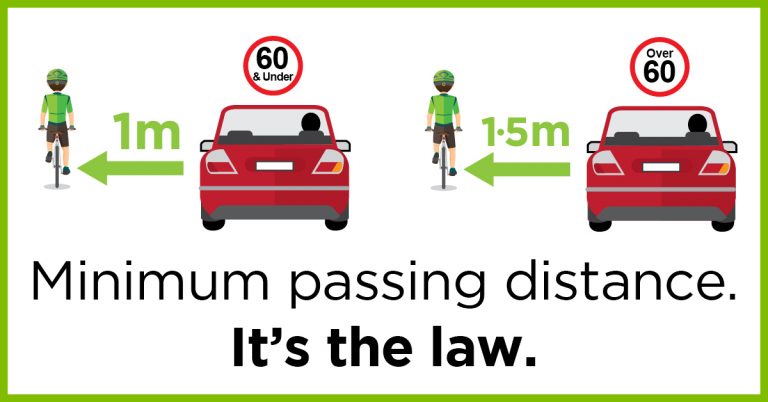 What is the Minimum Passing Distance?

When driving 60km/h and under, a motor vehicle must provide bike riders 1 metre of space when overtaking.

When driving over 60km/h, a motor vehicle must provide 1.5 metres of space when overtaking. 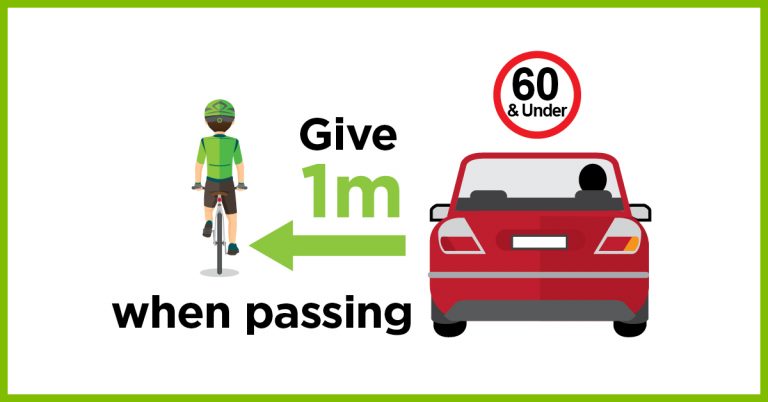 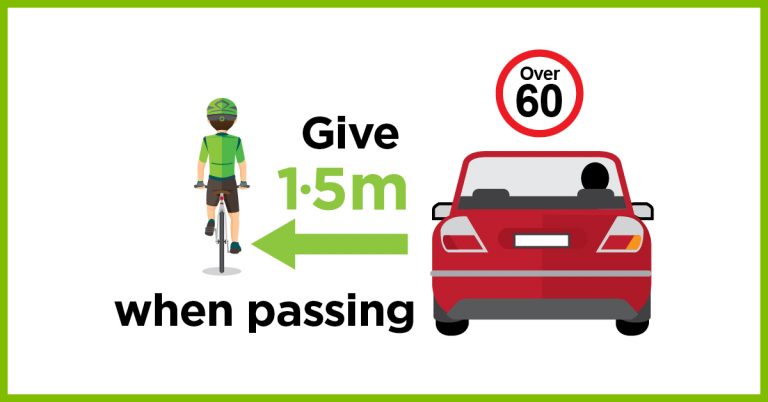 Exemptions to the law that enable driver to provide bike riders with this space.

Drivers will be exempt from the following rules, as long as it is safe to pass the bicycle rider with at least a metre of space and they have a clear view of approaching traffic: 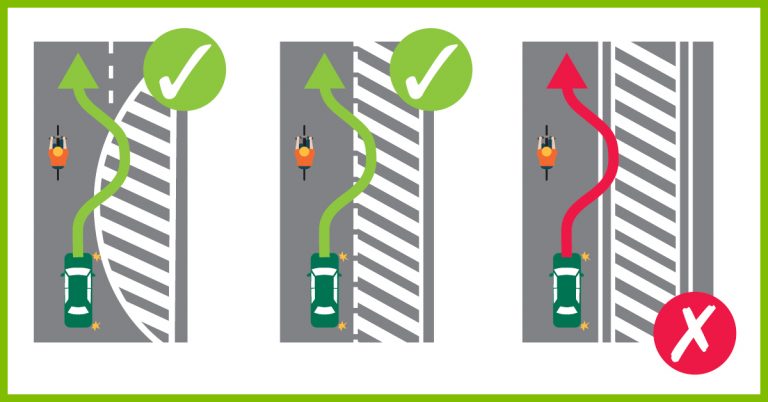 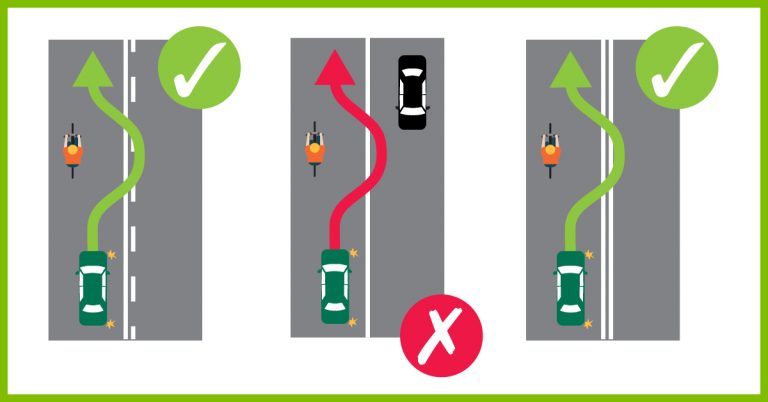 Extending the courtesy to paths

When riding on shared path and footpaths, we strongly encourage riders to give pedestrians and other riders 1 metre of space when overtaking. 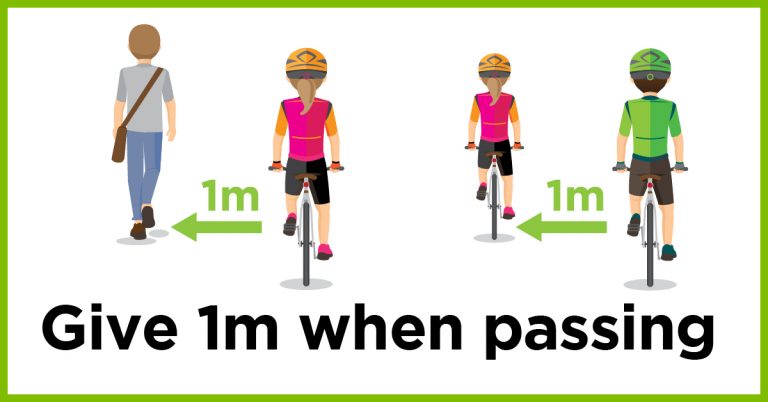 The project received funding from three partners including $20,000 from the Gilmore Stronger Communities Program Federal Funding from the Department of Infrastructure and Regional Development; $5000 from Sussex Inlet Rotary and the bulk of the funding $65,000 from Shoalhaven City Council’s minor improvements budget.

Mayor Amanda Findley is very thankful for the funding, “We would like to thank the Federal Government and Sussex Inlet Rotary for supporting the project to ensure children can learn to ride their bikes safely, off the roads, in a simulated road environment.  This facility educates children on road safety, provides enjoyment, as well as peace of mind to parents. The extra funding and support is very much appreciated to allow us to build something for the children and parents in the area.”

Federal Member for Gilmore, Ann Sudmalis said she was delighted to support a facility that teaches children how to ride a bike and bike rules, “It is great to see this project come to together, it will be an important community asset offering both a fun environment for young people and the opportunity to practice their skills,” she said.

Council worked side by side with the community in consulting with their needs holding onsite meetings with community group representatives and local primary school students to examine the need for a Learn to Ride facility and potential new sites.  Site investigations specifically focused on public reserves with existing recreation facilities and how to minimise the requirement for vegetation removal.

In February, Bicycle NSW along with 75 other bodies, made a submission to the NSW Parliamentary Inquiry in to Driver Education, Training and Road Safety. You can read our submission on the NSW Parliament Inquiry website. Our main recommendations were: On May 22nd, we appeared alongside the Amy Gillett Foundation and the Australian Cycle Alliance, to present further to the inquiry on our recommendations and need for greater education across all road users. The topic has garnered significant media interest resulting in news articles and radio interviews. We spoke to 2HD Newcastle ahead of the hearing and discussed the proposal and the work our local affiliated BUG, Newcastle Cycleways Movement have been doing in pushing for the CycleSafe Network. We will continue to update our members and stakeholders as the outcomes from the Inquiry are made available.

Bicycle NSW presents their position on the new fines for bicycle offences;

Recently we discussed the mandatory Photo ID issue, and this elicited a great range of responses. Thank you for this.

This week we wanted to present the Bicycle NSW position on the large increases in fines for bicycle offences:

Our position remains that we oppose the automatic equivalence of bicycle and motor vehicle fines. The fines should be based on the potential negative consequence of the offence. For example at present, some speeding fines for heavy vehicles are much greater than for cars because the potential consequences are considered.

At Bicycle NSW we believe any policy or regulatory changes should make riders safer and encourage riding, so as to benefit health, transport, community and the environment. We do not believe that these fine increases will help achieve these aims. As NSW roads face more and more congestion, the Government should be looking at ways to encourage bike riding as a form of transport, rather than discouraging riding.

We encourage all road users to follow the rules and share the road. We know that a good education campaign is the key to behavioural change. During the Government’s committee process there was no hard evidence that higher fines would produce greater compliance than an effective education campaign. The recent Queensland “Stay Wider of the Rider”,  and the NSW motor cycle safety “Ride to Live” campaigns are good examples.

Which of these is far more dangerous? And look at:

Who is the vulnerable road user here?

At Bicycle NSW we will continue to work with the Government to achieve a better solution. To aid this, and support our voice, we suggest that concerned riders should write to their Local MP, and to the Premier seeking a reconsideration of these measures.

Some members have reported problems reading the website Ride Calendar on their Smartphones and Tablets. With so many types of phones and other devices it is difficult to give specific instructions covering all but if anyone is having issues reading the Ride Calendar please call Wayne on 02 4423 7430 and he will attempt to assist.